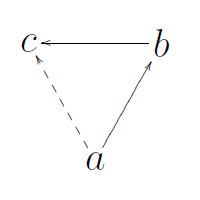 The problem of dictionary coherence is notably related to synonym transitivity: are synonyms transitive one with another? Usually, the response is negative. But isn’t this established wisdow questionable? Don’t we need to distinguish between:

This casts lights on the fact that our notion of synonymy is cross-languages: if words A and B of a given language L1 are synonyms, and if a word C of another language L2 is synonym with A, then C is also synonym with B.

This entry was posted in blog and tagged synonym transitivity, synonymy. Bookmark the permalink.